Today was one of those days when I knew my run was going to be fantastic. I spent the entire day waiting for three o'clock to roll around so I could meet up with Katherine for our run. It had been snowing for two days and the sun started to come out as I was getting ready to head out the door.  What a gorgeous day! 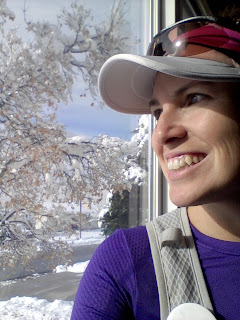 Our plan was to run four miles out from Katherine's house in White City out to Draper Park and then add a little extra mileage from there so we would do an out and back of nine miles.  It was chilly, but we were both pumped and ready for an adventure! 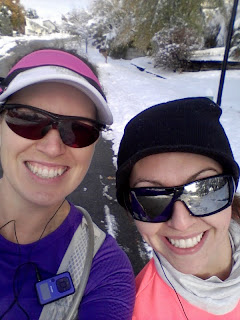 The first four miles flew by and I even doubted that we had run that far (even though we had.)  Once in Draper we headed up the Porter Rockwell Trail that looked particularly beautiful half covered in snow. 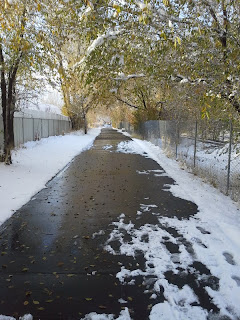 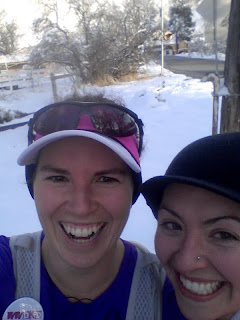 The hard thing about this out and back is that the out is mostly downhill, making the back mostly uphill.  I was not looking forward to the hills to come because the last time I ran up this way (1700 East from Draper to Sandy) I already had a half marathon under foot and was starting to feel the pain.  Luckily, it wasn't nearly as difficult as I had remembered it and was able to run much more comfortably than anticipated.  The hard thing was, try as I may, Katherine is quite faster than I am so I spent the entire second half of our run desperately trying to catch up to her.  The entire way back I willed myself to run faster and catch her.  Finally all that good karma I've stocked up on was paid back to me in the form of a red light, and I caught her!

We mostly stayed out of the snow, but had to run in patches of it here and there.  As we neared the end of our run the sun went behind a cloud and it started to get cold.  We picked up the pace thinking of warm showers and hot meals and finished our nine miles in 1:38 (I think.)  I forgot my Garmin *gasp* and I think it was 3:21 when we started and 4:59 when we finished.  Not too shabby. I should chase Katherine more often! 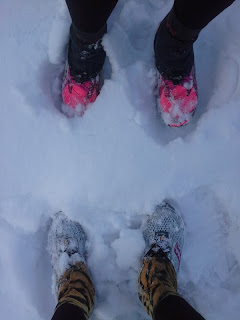