Today's run started out simply enough. My family all loaded in the van for Boondocks (think arcade + bouncy houses) and I set off on foot.  Only nine miles away I would run and meet them there. Easy enough right? Around the time I knew I would need directions in Draper my cell would not pick up wifi, and I didn't know the way so began to wind through the streets guessing which way I should go. Long story short I ended up lost.

But let me back track a bit. The run from my house to Draper is mostly downhill. I love running downhill! I brought Ozzy along with me. We encountered a bit of rain the first few miles, but nothing too bad. The next few miles were beautiful. The sun peeked through the clouds and giant sun rays where shining through the cloulds and onto the mountains all around the valley. Stunning!  When it started getting dark and I called Jeff trying to figure out if I was on track.  He didn't know the exact address, and after a few chats and texts I decided to just continue west.  As it was growing darker I looked in my pack for my flash light only to find it was missing.  Bummer.  Luckily I was wearing a bright yellow top and lots of reflective gear.  I got to the frontage road and thought I was nearly there but I hit a dead end.  At the same time a car came up next to me driving really slowly (I think he was as lost as me) and I was happy to have both Ozzy and my pepper spray with me.  I had two choices.  A field with a large antlered dear bounding toward me, or turn around and go back the way I came.  I chose the latter.

It was dark now and my phone battery was getting low.  Jeff called to let me know they were on their way to get me and we discussed my location.  A few moments later they zoomed passed me on the freeway honking away.  Then just minutes later the family pulled up and scooped Ozzy and I up and we headed home for a nice hot pot of ham and potato chowder.  When we got home I remembered the nagging ache I was having on one of the toes on my left foot.  What a surprise I had when I took off my shoe!  And before you say so, I already got fitted by a running store for new shoes that are in fact a whole size larger than usual. Small price to pay for the fun I had. 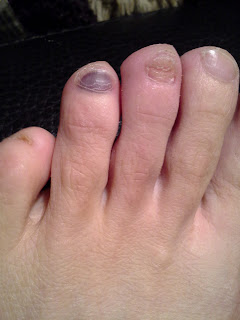 This accidental adventure was amazing!  I had so much fun!  It was just what I needed.