Today was awesome!  I arrived at the start of the Corner Canyon 25k and 50k at just after 6am.  It was pretty dang chilly out in my tank top, but I knew it wouldn't be long before it was hot.  First thing, I saw Lindsay, my running buddy who was supposed to run this race with me, but due to a hurt ankle was just volunteering instead.  She was a doll and got me a blanket from her car as I was quite cold.  The RD got all      the formalities out of the way,  and the race began.

I have never been so great at sticking to my own pace at the beginning of a race!  I started at the back of the pack and followed a long line of folks on some single track up to the Aquaduct trail.  I was feeling annoyed that I was at the back of this line with no control to go any faster, but honestly, it was a good thing and made me keep my pace slow to start.  I just decided to relax and go slow the first miles.  Once on the Aquaduct trail it was very wide and rolling, so I took advantage of being able to bomb some of the downhills.  We ended up at the Orson Smith trailhead which took us straight up the mountain all the way to the Bonneville Shoreline trail and "Mountain Lion bridge."  This climb was difficult, but I had trained for it and wasn't having any difficulties.

Past the bridge is one of my favorite spots on the Shoreline trail.  It's winding single track with rolling hills, mostly downhill.  Here is where I opened it up.  I started passing people and feeling like the queen of the world!  From BST we headed up the Gas Line trail, which I had never been on.  Very nice, uphill, but mostly runnable.  Then on to Ghost Falls all the way to the top.  I passed a couple more people and settled in behind a woman running the perfect pace uphill for me to follow.  Once to the Canyon Hollow and Brock's Point trail, I passed her too and really let myself fly. There was plenty of downhill and very familiar, as I've run that section many times.  I was loving life when I pulled into the second aide station at about mile 9.

I only stayed there long enough to gulp a cup of water and headed screaming down Clark's to Ann's.  From the top to mile 11.5 it was awesome downhill and I was oh so very happy thinking my climbing was finished. I was wrong.  There was a detour straight uphill at mile 11.5 that led to what I can only describe as an ankle breaker steep downhill on the other side.  There were lots of loose rocks from pea to grapefruit size.  I took it pretty slow, and thought of Lindsay and her ability to crush steep sections of downhill.  Finally, after ankle breaker hill and a bit of a bush wack, including jumping a ravine (very small) I was to the final aide station at Potato Hill.

By now it was getting hot and so I not only drank a cup of water, but poured one down my shirt as well.  Now I was in the final push and I knew (most of) the rest of the trail like the back of my hand.  I passed another woman who had passed me early on.  I pushed harder.  I was going to finish in under my goal time!  it wasn't until the final two miles that I was really starting to feel hot and tired, but I was so close I could taste it!

I finished in (according to my Garmin, no official race results yet) 3:07!  That is a 12:02 pace!  I am completely floored!  My estimated finish time was 3:15-3:30.  It was nice to see Lindsay again at the finish line.  She was just as surprised as me that I came in so soon.  We sat and talked for a bit and I told her about the course and she fed me watermelon.  I think I am going to definitely have to get my running girls out to do this with me next year!  It was hard, I pushed extremely hard, and I killed it!

Then I came home and sat in a cold bath and took a hot shower and proceeded to do yard work, then take the kids to the pool.  Life doesn't slow down because I had a race.  But I wouldn't change it for the world! 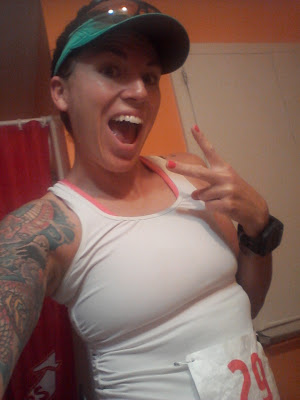 Here I come!  Thanks for snapping this, Lindsay! 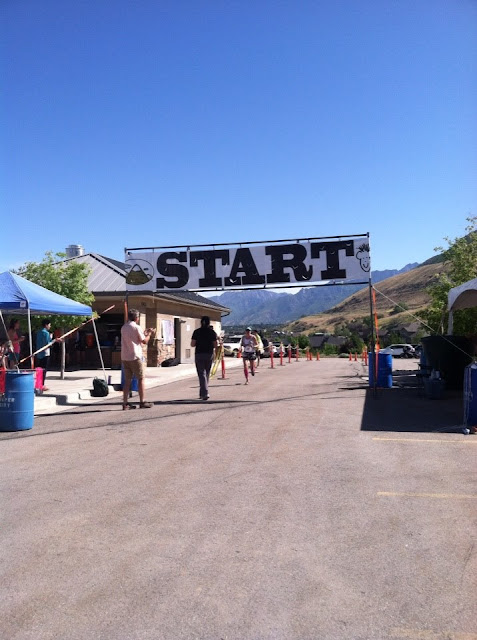 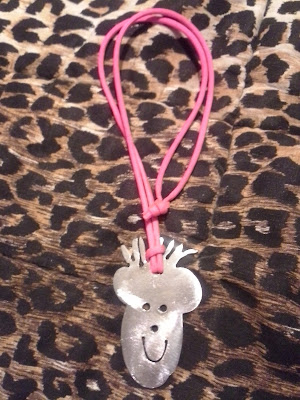 Overall, it was absolutely wonderful!  The course, the race directors, the volunteers, the swag, the medal.  All fantastic! Plus, I actually feel really great this evening, aside from one sore and purple toenail.  We all know that one is falling off, but toenails are for sissies, right?
Posted by Renee at 6:47 PM